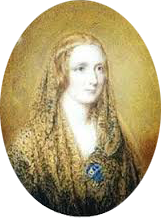 Mary Shelley (30 August 1797 – 1 February 1851) was an English novelist, short story writer, dramatist, essayist, biographer, and travel writer, best known for her Gothic novel Frankenstein: or, The Modern Prometheus (1818). She also edited and promoted the works of her husband, the Romantic poet and philosopher Percy Bysshe Shelley. Her father was the political philosopher William Godwin, and her mother was the philosopher and feminist Mary Wollstonecraft.

Mary Shelley was born Mary Wollstonecraft Godwin in Somers Town, London, in 1797. She was the second child of the feminist philosopher, educator, and writer Mary Wollstonecraft, and the first child of the philosopher, novelist, and journalist William Godwin. Wollstonecraft died of puerperal fever ten days after Mary was born. Godwin was left to bring up Mary, along with her older half-sister, Fanny Imlay, Wollstonecraft's child by the American speculator Gilbert Imlay. A year after Wollstonecraft's death, Godwin published his Memoirs of the Author of A Vindication of the Rights of Woman (1798), which he intended as a sincere and compassionate tribute. However, because the Memoirs revealed Wollstonecraft's affairs and her illegitimate child, they were seen as shocking. Mary Godwin read these memoirs and her mother's books, and was brought up to cherish her mother's memory.