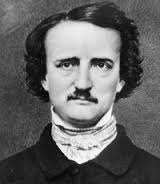 Edgar Allan Poe (January 19, 1809 – October 7, 1849) was an American author, poet, editor, and literary critic, considered part of the American Romantic Movement. Best known for his tales of mystery and the macabre, Poe was one of the earliest American practitioners of the short story, and is generally considered the inventor of the detective fiction genre. He is further credited with contributing to the emerging genre of science fiction. He was the first well-known American writer to try to earn a living through writing alone, resulting in a financially difficult life and career.

He was born Edgar Poe in Boston, Massachusetts, on January 19, 1809, the second child of English-born actress Elizabeth Arnold Hopkins Poe and actor David Poe, Jr. He had an elder brother, William Henry Leonard Poe, and a younger sister, Rosalie Poe. Their grandfather, David Poe, Sr., had emigrated from Cavan, Ireland, to America around the year 1750. Edgar may have been named after a character in William Shakespeare's King Lear, a play the couple was performing in 1809. His father abandoned their family in 1810, and his mother died a year later from consumption (pulmonary tuberculosis). Poe was then taken into the home of John Allan, a successful Scottish merchant in Richmond, Virginia, who dealt in a variety of goods including tobacco, cloth, wheat, tombstones, and slaves. The Allans served as a foster family and gave him the name "Edgar Allan Poe", though they never formally adopted him.